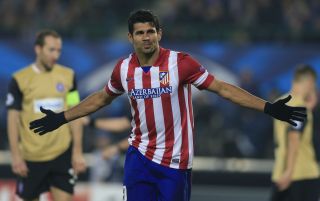 Diego Costa, currently the subject of a row between Brazil and Spain over his international eligibility, scored a goal in each half after Raul Garcia had given Diego Simeone's side the lead in the eighth minute.

The result leaves Atletico top of the group with maximum points and with one foot in the round of 16, while Vienna's woes continue, with just one point and no goals to their name as Nenad Bjelica's side struggle in their maiden Champions League campaign.

The hosts made three changes from the weekend's 1-1 draw with Ried as Emir Dilaver, Tomas Jun and Marko Stankovic came in for Marin Leovac, Fabian Koch and Tomas Simkovic.

For Atletico, Miranda, Tiago and Arda Turan replaced Diego Godin, Mario Suarez and David Villa from the 1-0 loss at Espanyol on Saturday, while top scorer Costa featured in the competition for the first time this season after serving a two-match suspension.

The visitors threatened first, Juanfran stinging the palms of Heinz Lindner with a fizzing drive from the corner of the box in the fourth minute.

Atletico took the lead four minutes later as Koke released Filipe Luis on the left-hand side of the box, and he squared for Garcia, who was left with the simple task of tapping home into an empty net from eight yards.

That lead was doubled in the 20th minute by Costa, who broke swiftly from halfway, beat the last defender on the edge of the box and calmly slotted the ball beyond Lindner for his 11th goal of the season.

Costa could have put the result beyond doubt 10 minutes before the break, blazing the ball over from close range following another slick combination between Luis and Koke.

Despite Atletico's domination, Vienna almost found a way back into the game two minutes later, Philipp Hosiner smashing a first-time volley against the crossbar after getting on the end of Florian Mader's raking pass.

Five minutes after the break, Mader flashed a 25-yard drive narrowly over the angle of post and bar as the hosts searched for their first ever Champions League goal.

Atletico ended the game as a contest in the 53rd minute as Costa netted his second of the match.

Half-time substitute Emiliano Insua cut the ball back from the left to the striker, who evaded the attentions of a defender and slotted underneath Lindner from 10 yards.

Ten minutes from time, Lindner reacted brilliantly to save Markus Suttner's inadvertent header towards his own goal as Vienna were spared any further punishment on an otherwise miserable night.