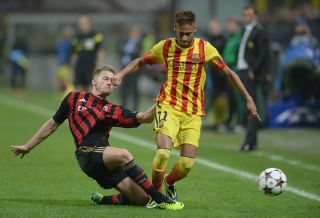 The Catalan giants have made an excellent start to the season, topping La Liga with 11 wins from their 12 league fixtures while also leading the way in UEFA Champions League Group H with seven points from three games.

New head coach Gerardo Martino has not lost a match since taking over at Barcelona - the club's last defeat came to Bayern Munich in May - and they would move five points clear of Milan with a win on Wednesday.

Their recent form is in spite of a goal drought from Lionel Messi - who has scored just once, during the 1-1 draw at San Siro in last month’s reverse fixture with Milan, in his last five matches - but Martino is sure his star man will get back to his best soon.

"I continue to think the same about him," Martino said.

"It is difficult to do an individual analysis of a player in every single game, but Leo continues to be the most important player in a team replete with important figures.

"His manner of playing still offers us a huge amount and, if the team continues to win, you will see the best of our best players shortly."

Messi has still scored four goals in three UEFA Champions League fixtures this term, with the Argentinian netting a hat-trick on matchday one against Ajax.

That was his fourth Champions League treble - a feat no other player has achieved - and was his 24th hat-trick for Barcelona.

Barcelona have lost just one of their last 23 UEFA Champions League fixtures at home - that being the 3-0 reverse against Bayern in last season's semi-finals - while they have won 21 in a row at home in La Liga.

While Messi has not been among the goals in recent times, Chilean Alexis Sanchez has helped to fill the void, netting five in as many matches.

Milan - who sit second in Group H with five points from three matches - have not won on their last five visits to Spain and suffered a 2-0 defeat to Fiorentina on Saturday, a result that saw them slide to 11th in the Serie A table.

Massimiliano Allegri's side are already 19 points behind table-toppers Roma and a repeat of last season's third-placed finish looks unlikely.

Milan have not won an away match this season, losing three and drawing four, and all signs point towards that trend continuing on Wednesday.

Defender Mattia De Sciglio (knee) made his first appearance since August last month, but attackers Stephan El Shaarawy (thigh) and Giampaolo Pazzini (knee) will be sidelined for some time.

Another defender, Daniele Bonera, is back in training following a knee injury, but is unlikely to feature in Spain.