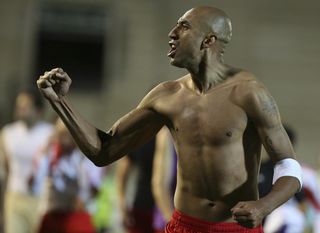 First-half goals from Filip Djuricic and Luisao gave the home side an early advantage that they were not prepared to relinquish, and they now find themselves comfortably off the mark in a tough group.

With Paris-Saint Germain and Olympiacos still to come, Anderlecht now face a tough task to bounce back after struggling against their hosts.

For Jesus, who watched his men fall to Chelsea in the quarter-finals of the competition in 2012, the result represented an ideal home start.

Despite a number of injuries, the 59-year-old named a strong line-up, with 19-year-old Lazar Markovic, who was heavily linked with Chelsea in the close-season, leading their attack.

Meanwhile, Anderlecht manager John van den Brom also opted to showcase youth in his side, with 16-year-old Youri Tielemans named on the bench.

There was a return for goalkeeper Silvio Proto, who was a doubt for the clash with a stomach injury but shook off that problem to be involved.

However, within five minutes he was picking the ball out of the net as Benfica went ahead through Djuricic.

The Serbia international responded quickest when Proto parried an earlier effort back into his path, and he had no problem in converting.

Things did not get any easier for the visitors, and Oscar Cardozo looked set to tee up a team-mate in the 17th minute after easing past two defenders, but his cross was lacking.

And despite the determined resilience of the Belgian side, Luisao doubled Benfica’s advantage after half an hour.

The 32-year-old showed plenty of skill to chest down a header from Andre Almeida and then volley neatly past Proto, leaving the Belgium international with no chance.

Anderlecht did have a chance to get back in the game just before half-time, but Luka Milivojevic wasted his effort following a corner.

Whatever was said by Van den Brom at the interval appeared to work as they came out with a renewed fight and immediately began to press their hosts.

They almost had goalkeeper Artur Moraes beaten soon after the restart, but the Brazilian just managed to get outstretched fingers onto a header from 19-year-old Aleksandar Mitrovic after 57 minutes.

However, it was Cardozo who perhaps had the best chance of the half after receiving a ball into the box only to react slowly and prod wide.

Anderlecht had no intention of giving up without a fight and it looked like they had gained a consolation in stoppage time when Matias Suarez connected with a free-kick from Dennis Praet, but his effort was well saved.

Anderlecht will now face Olympiacos on October 2, while Benfica will look for more of the same when they face Paris Saint-Germain.