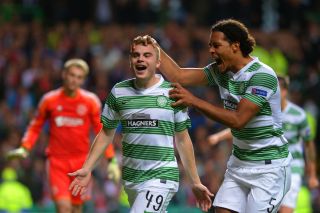 Having fallen to Group H defeats against Milan and Barcelona, triumph over the Eredivisie outfit represents a huge boost to the Scottish champions' European hopes.

But it was tough going at times for Neil Lennon's men, with Christian Poulsen striking the post for the visitors before Forrest converted from the spot thanks to Stefano Denswil's 43rd-minute foul on Anthony Stokes.

Kayal replaced suspended Celtic captain Scott Brown in the centre of midfield, while Forrest was rewarded for his equaliser from the bench against Hibernian with a start on the right wing in place of hamstring victim Kris Commons.

After an enterprising start from the home side, it was Ajax who went closest to opening the scoring when Poulsen steered a side-footed volley against the post with half an hour played after Charlie Mulgrew failed to clear a free-kick from Viktor Fischer.

But just as Celtic were beginning to toil they took the lead on the stroke of half-time after Denswil clumsily felled Stokes on the left-hand edge of the penalty area.

Debate over Forrest's spotting of the ball ensued, with Veltman, Poulsen and Celtic's Virgil van Dijk booked for their part in the argument, but the 22-year-old kept his cool to drill the kick beyond Jasper Cillessen's dive into the top right corner.

Perhaps buoyed by his end to the first-half, Forrest rampaged in from the right and forced Denswil to scramble clear at the near post two minutes after the restart.

Fraser Forster produced a stunning save to thwart Serero following the Ajax midfielder's slick one-two with Kolbeinn Sigthorsson, before Celtic claimed an unlikely two-goal cushion in the 54th minute.

Georgios Samaras cut in from the left byline to have a goal-bound effort blocked by Veltman and the loose ball fell to Kayal, whose clipped 25-yard effort took a decisive deflection off Denswil to nestle in the bottom corner.

Siem De Jong fizzed a drive from distance narrowly past the far post as Ajax sought a route back into the game, while Kayal wonderfully spun Serero before thudding another well-hit effort into Cillessen's chest as the game entered its final quarter.

Serero found space in the Celtic box with 11 minutes remaining but missed his kick before blazing over and Ajax reached the halfway point of the group stage with a solitary point despite Biton's late censure and fellow sub Schone's last-gasp intervention.