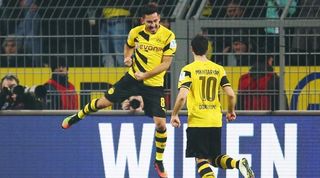 A 2-0 reverse at Arsenal in their last European fixture is marked down as the only blemish on their record in this season's competition, with four wins from as many games before that defeat seeing them amass 12 points.

Jurgen Klopp's men sit two points ahead of Arsenal and have already secured a place in the last 16, though they still have work to do if they are to guarantee first place in the group.

Both of Dortmund's clashes with Arsenal finished 2-0 to the home side, meaning the Bundesliga club's superior goal difference gives them an advantage in their quest to finish above the London club and even a draw should assure them of top spot.

Dortmund have endured a wretched Bundesliga season so far, but after lifting themselves off the bottom of the table with a 1-0 win over Hoffenheim on Friday, defender Subotic is keen for the team to show that they are on the up.

He told reporters: "Our aim is not just to win the match and take our place in the last 16 as group winners, we also want and have to prove in this match that we've turned a corner."

Anderlecht head to Germany knowing they are guaranteed to finish third regardless of results in the final group games.

A place in the Europa League knockout rounds awaits Besnik Hasi and his players and they will be keen to end an encouraging Champions League campaign on a high.

The Albanian could make a host of changes on Tuesday after slamming his team following Saturday's 4-2 defeat at Mouscron-Peruwelz.

"Our first period shocked me," he remarked. "We were completely asleep. There are a lot of questions to ask.

"It is really shameful for supporters We were never in the duels. We have made only a single foul in the first half. With such a state of mind we are only a trivial team.

"This match was much more important than Tuesday's. What are we going to play for in Dortmund?

"For honour? For money? On Tuesday, the players fit and the most deserving will play."

To make matters worse for Hasi, he has several first-team players missing, with Matias Suarez (knee), Bram Nuytinck (toe), Andy Najar (knock) and Steven Defour (calf) all expected to miss out, but Fabrice N'Sakala could return.