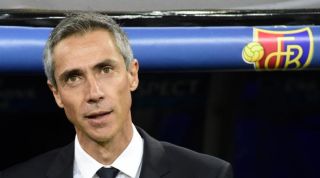 A 5-1 defeat at Real Madrid on matchday one proved the catalyst for an upturn in form for Basel, who have lost just one of their six matches since then.

Included in that run was an excellent 1-0 home triumph over Liverpool and another win by the same scoreline on Saturday kept them one point behind Swiss Super League leaders FC Zurich.

Shkelzen Gashi scored the goal that saw off Young Boys over the weekend.

"We are very pleased with these three points," Sousa told the club's official website after the match

"We have developed a strong first half. [I admire] the good and fighting spirit of the players."

In another interview prior to his side's Group B trip to Ludogorets, Sousa was quoted by the Daily Star as saying: "We always try to express ourselves on the pitch, and at the same time, win.

"That is what we managed to do against a historical team like Liverpool with great players.

"I am happy with what we have done and hope we can keep up this level of play."

Ludogorets will be out for revenge against Basel, given their elimination from the same competition last year.

The two sides clashed over two legs with a spot in the group stages up for grabs.

Basel took charge of the tie with a 4-2 win in Bulgaria, before wrapping it up with a 2-0 home success.

Although Ludogorets have yet to pick up a point in Group B, they can take encouragement from each of the matches they have played so far.

They pushed Liverpool all the way in a 2-1 defeat at Anfield in September - settled by Steven Gerrard's 93rd-minute penalty.

Georgi Dermendzhiev's men then took the lead against Real Madrid on matchday two, only to lose 2-1 in Sofia as Karim Benzema netted the winner with 13 minutes to play.

Ludogorets, who had to win through three qualifying rounds to reach the group stages, sit second in the Bulgarian top flight, seven points behind leaders CSKA Sofia.

A winless run of two games in the league came to an end courtesy of Friday's 3-1 success over Haskovo, in which Marcelinho, Cosmin Moti and Dani Abalo were all on the scoresheet.