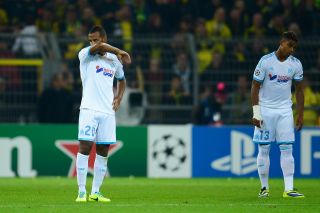 Napoli are one place ahead of Marseille in the standings after following up their win over Dortmund with a 2-0 loss at Arsenal last time out, and will be eager to get back on track in their battle for progression to the knock-out stages.

And they should be confident of earning a result at the Stade Velodrome, where Marseille have won just two of their last six encounters in continental competition.

Both those victories came in the UEFA Europa League against weaker opposition, and Rafael Benitez's side - who head into the clash on the back of their first Serie A defeat of the season against Roma on Friday - will fancy their chances of getting back to winning ways in France.

Gonzalo Higuain is likely to be key to Napoli's hopes, with the Argentina international striker having scored four times for the club since joining from Real Madrid in July - including the opener in their 2-1 success over Dortmund last month.

Still, the visitors' away record in the Champions League is far from impressive, with Napoli tasting victory in just one of their last five games on their travels.

Marseille should take heart from that statistic, and will hope that striker Andre-Pierre Gignac can produce his best form as they seek their first points of the competition.

Gignac scored 18 goals in all competitions last season, but has found the net just three times so far this term.

Meanwhile, Benitez has a near fully-fit squad to choose from, with winger Juan Zuniga the only absentee.

Dimitri Payet is poised to return to the Marseille side after the winger missed Friday's 1-0 defeat to Nice through suspension, providing Baup with a full complement of players.

Marseille's last victory in the Champions League came in 2012 as they beat Inter in the last 16, and Baup will hope his side can replicate that surprise win as they aim to keep their qualification hopes alive.