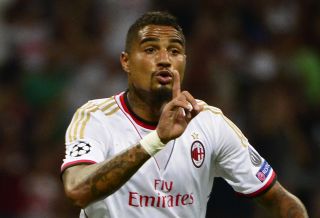 Goals from Kevin-Prince Boateng either side of a Mario Balotelli strike handed the hosts a comfortable win on the night, clinching their progression courtesy of a 4-1 aggregate scoreline.

The result also eased the pressure on Milan boss Massimiliano Allegri, whose job was reportedly under threat should the Italians have failed to ensure they would make the lucrative step beyond the play-offs.

With the tie finely poised after a first-leg draw in Eindhoven, Phillip Cocu and Allegri made just one change between them, with the latter opting for Mattia De Sciglio in place of Urby Emanuelson at left-back.

But, even with two familiar teams on the field, the start of the game provided plenty of evidence that fans would be treated to an attacking encounter in Italy. Tim Matavz was the recipient of the first clear chance, with his header being brilliantly kept out by Christian Abbiati, but it would be Milan who took an all important lead in the tie moments later.

The goal was all Boateng's work, with the midfielder picking the ball up 25 yards from goal before shifting onto his right and firing beyond the despairing dive of Jeroen Zoet to put his side ahead.

Clearly buoyed by the goal, the hosts began to dominate the match. A short backpass from Joshua Brenet almost allowed Stephan El Shaarawy to make the most of his side's ascendency soon after, before the 19-year-old full-back also presented Balotelli with an opportunity after dithering on the ball. El Shaarawy then came mightily close to scoring as his volley smashed off the bar before hitting the line, with replays proving inconclusive as to whether the ball went in.

However, that near miss appeared to spark the visitors into life, and they came within inches of equalising in the dying moments of the first half when Jetro Willens' cross-cum-shot struck the crossbar with Abbiati stranded.

The Italian goalkeeper might have been lucky not to concede just before the break but there was no doubting the part he played in preventing a PSV equaliser in the very first minute of the second half. A cross from the left evaded a mass of bodies in the Milan box before landing at the feet of the unmarked Georginio Wijnaldum but, with the Dutchman looking certain to score, Abbiati somehow produced a stunning close-range block of a vicious half-volley.

And the merits of that stop were clear in the 54th minute, as Balotelli put the tie beyond all doubt by showing quick reflexes to volley home left-footed after Philippe Mexes flicked on a dangerous El Shaarawy free-kick.

The hosts enjoyed control of the match from that moment on, even with the possibility of a momentum-shifting PSV goal looming. But the necessary gloss was added to the scoreline with just 13 minutes of normal time remaining as Boateng managed to squeeze a left-footed shot under Zoet's hand from a tight angle to finally kill the visitors' hopes of progression.