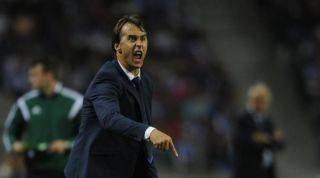 The La Liga outfit head to Portugal hoping to extend their one-point lead at the top of Group H.

After beginning their UEFA Champions League campaign with a 6-0 trouncing of BATE, Porto showed outstanding character on match day two.

Jackson Martinez scored twice in the last five minutes on that occasion, as Porto salvaged a 2-2 draw at Shakhtar Donetsk.

Bilbao have only claimed one point from their two matches, losing 2-1 at BATE last time out.

But despite that, Spaniard Lopetegui is not taking Ernesto Valverde's men lightly.

"Athletic Bilbao is a team whose main characteristic is to be very complete," Lopetegui told Television de Galicia.

"[They have] an important balance [in] both attacking and defending - a team that attacks and defends well.

"Last year [they] did an exceptional season and I am convinced that this season [they] will again make equal.

In Martinez and Yacine Brahimi, Porto have two of the group stage's three top scorers - both having netted three times already.

And both will be licking their lips ahead of facing a Bilbao side who are stuck in 16th after just one win in eight La Liga matches this season.

Bilbao's plight was summed up on Saturday when despite taking a sixth-minute lead through Aduriz, they still failed to win.

Nolito's 73rd-minute leveller ensured Celta Vigo left Bilbao with a 1-1 draw. Bilbao have not won in any competition since August.

Porto's league form has been far better and they sit second - four points adrift of Benfica.

A 3-1 home loss to Sporting Lisbon in the third round of the Taca de Portugal on Saturday was disappointing, though, and Lopetegui will demand a response.