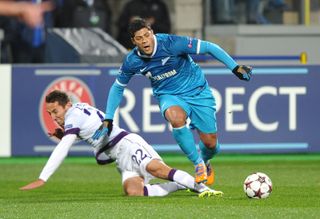 The 27-year-old spent four seasons with the Portuguese club, scoring 54 goals in 99 league appearances, before moving to Russia in September 2012.

He has already scored twice in the UEFA Champions League this season, but Luciano Spalletti's men have picked up just one point from their two games in Group G so far.

After losing to Atletico Madrid in their opener, they drew 0-0 against Austria Vienna, with Tuesday's tie likely to be a close one between the sides placed second and third in the group.

Both are top of their domestic leagues and, while Porto have never lost at home against Russian opposition in the competition, Zenit have the better head-to-head record.

Porto have gone 50 matches unbeaten in the league though, and the Primeira Liga champions also won all four of their home fixtures in last season's Champions League.

However, they were beaten at home by Atletico last time out and if they are to bounce back from that disappointment, they are likely to need striker Jackson Martinez on top form.

The Colombia international has scored seven times in the league this season, as well as once in the Champions League.

Zenit, on the other hand, have lost four of their last five away games in the Champions League group stages and will be without midfielder Axel Witsel after he was sent off against Austria Vienna.

Both sides come into the game off the back of domestic wins, with Porto beating Trofense 1-0 in the Taca de Portugal on Saturday and Zenit downing reigning Russian champions CSKA Moscow 2-0 on Friday thanks to goals from Roman Shirokov and Hulk.

Russia international Shirokov is another danger that Paulo Fonseca's men will need to be aware of, as he has scored five times in the Champions League this season, including a hat-trick in their 4-1 play-off win over Pacos de Ferreira, which took place at Porto's Estadio do Dragao.