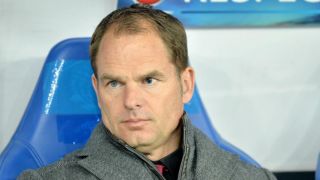 Frank De Boer is confident Ajax are ready for their first competitive game of the new season as they enter the UEFA Champions League at the third qualifying round.

The four-time winners travel to Austria for the first leg of their clash with Rapid Vienna on Wednesday, the Dutch side one of three former champions in at this early stage.

Celtic and Steaua Bucharest will also make their bow in the 2015-16 competition this week, the former hosting Qarabag while the latter welcome Partizan to Romania.

Ajax are looking to plot their way to a sixth-successive appearance in the Champions League group stages this year, and De Boer has been pleased with their pre-season.

"The preparation has been good," he told the club's official website. "Especially as we had only four weeks, where there are usually six or seven.

"While the boys may have slightly fewer matches in the legs, I feel that we are ready for it. We are ready for Rapid, the challenge now is to put the finishing touches together."

After reaching the round of 16 last season, Shakhtar Donetsk and Basel both return to the competition with first legs away from home.

The Ukrainian club travel to the venue of their 2009 UEFA Cup triumph to face Fenerbahce - who could give starts to new signings Robin van Persie and Nani - while Basel meet Lech Poznan.

The visit of Sparta Prague is the first hurdle put in place of CSKA Moscow as the Russian Premier League outfit seek a return to the group stages, with Sparta looking to go beyond this stage of the competition for the first time since 2010-11.

APOEL, BATE Borisov and Malmo will have similar hopes to CSKA when they start against Midtjylland, Videoton and Salzburg respectively, while Club Brugge begin their quest for a first group appearance since 2005-06 at Panathinaikos.