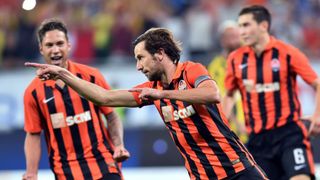 Robin van Persie will have to make do with UEFA Europa League football with Fenerbahce after Wednesday's defeat to Shakhtar Donetsk.

Van Persie arrived in Turkey to spearhead Vitor Pereira's new-look Fener squad but the Super Lig giants were beaten 3-0 in the third qualifying round of the UEFA Champions League at the L'viv Arena following the sides' goalless first leg.

While Van Persie was not in the matchday squad, fellow former Manchester United man Nani started the game and watched on as Oleksandr Gladkiy opened the scoring for the hosts 25 minutes in.

Darijo Srna and Alex Teixeira completed the victory after the break with another pre-season acquisition Simon Kjaer sent off late on for Fener.

There were no such problems for last season's Champions League quarter-finalists Monaco, who breezed into the play-off stage 7-1 on aggregate against Young Boys.

New signing Stephan El Shaarawy scored his first goal for the club in Wednesday's 4-0 win while a goalless draw for Celtic at Qarabag was enough to secure them a 1-0 progression.

Swiss champions Basel join them in the next round after Birkir Bjarnason ensured a 1-0 second-leg victory over Lech Poznan at St. Jakob-Park.

Elsewhere, Astana moved into the play-offs with a thrilling 4-3 victory over HJK in Kazakhstan.

Down to 10 men and trailing on away goals, Evgeny Postnikov scored deep into stoppage time to claim a dramatic victory with a stirring Partizan fightback ending Steau Bucharest's campaign.

Steaua led 2-1 on the night before Fernando Varela's dismissal, with Markjo Jevtovic, Andrija Zivkovic and Nikola Trujic all on target after the break to see the hosts through 5-3 on aggregate.

Alan Dzagoev's goal proved crucial in CSKA Moscow's 5-4 aggregate victory over Sparta Prague as Club Brugge recovered from a first-leg deficit to get past Panathanaikos 4-2 and Dinamo Zagreb edged past Molde on away goals.