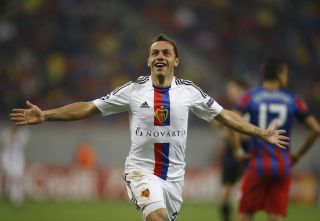 A sublime strike by Marcelo Diaz opened the scoring for Basel shortly after half-time on Tuesday, and Steaua boss Laurentiu Reghecampf responded by making three substitutions in quick succession as the hosts searched for an equaliser.

The Romanian champions were rewarded when Leandro Tatu's diving header in the 87th minute flew into the top corner to earn them a well-deserved draw.

The result leaves Steaua on one point at the bottom of Group E, while Basel stay in third behind Chelsea and Schalke with four.

The game's first chance fell to Basel’s Marco Streller in the tenth minute, as a throughball down the left channel saw him running in on goal, but his shot from left-side of the area was saved easily by Ciprian Tatarusanu.

Just minutes later, the visitors came desperately close to the opener when Ivan Ivanov rose highest to meet an inswinging corner, only for Macedonian defender Daniel Georgievski to head clear off the line.

Steaua had a chance of their own when the ball fell to Nicolae Stanciu in space on edge of area, but his left-footed effort flew high over the bar to his evident frustration.

But Basel again came close when a flowing move down their left flank saw Swedish full-back Safari exchange passes with Streller, but he shot into the side-netting from a tight angle.

And Yakin’s men nearly had a huge stroke of luck to go ahead shortly before half time, when Valentin Stocker's drilled 20-yard shot deflected off the knee of Lukasz Szukala, bounced into the ground and spun wickedly up and over Tatarusanu but bounced off the underside of the bar and out.

There was no fortune about the opener when it came shortly after half-time, though.

Steaua left-back Latovlevici played an awful pass straight to Streller 25 yards from goal, and the Switzerland international laid the ball into the path of Diaz who hit a wonderful first-time effort that dipped over Tatarusanu and in.

Latovlevici came close to making amends for his error just before the hour, but his goal-bound shot deflected off the head of substitute Federico Piovaccari and over.

Steaua, in desperate need to avoid a third successive loss, threw on Tatu and Lucian Filip shortly before the hour mark in search of the equaliser, and Filip almost had an immediate impact with a rasping long-range drive that was well saved by Yann Sommer.

The play was all the home side's by this stage and, as they turned the screw, Tatu blazed a shot over the bar from 12 yards, before Tanase burst in from the left and saw his beaten away by Sommer.

But, just when it looked like all the hosts' pressure was going to count for nothing, Tatu met Adrian Popa's centre with a brilliant diving header to earn his side a share of the spoils.