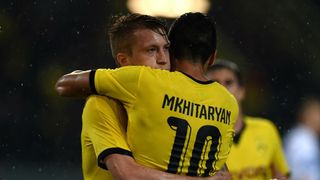 Borussia Dortmund booked their place in the UEFA Europa League group stage with a comprehensive 7-2 victory over Odd on Thursday.

Thomas Tuchel's side were rampant at Signal Iduna Park, their slick passing and movement creating a host of chances on the Odd goal.

After Ole Halvorsen had given the visitors a surprise lead, Dortmund took control and goals from Henrikh Mkhitaryan, Shinji Kagawa sandwiched a Marco Reus double to put them in complete command at the break.

Ilkay Gundogan grabbed his first of the season before Reus completed his hat-trick and Kagawa wrapped up an emphatic 11-5 aggregate win a minute from the end.

Dortmund will be joined in Friday's group-stage draw by Bordeaux and Ajax after both snuck through their second legs against Kairat and Jablonec respectively.

Bordeaux needed a late Enzo Crivelli strike to earn a 2-2 aggregate draw and progress on away goals, while 10-man Ajax drew 0-0 in the Czech Republic to advance 1-0.

The Premier League will only have its two automatic qualifiers - Liverpool and Tottenham - in the competition proper after Southampton were beaten 1-0, and 2-1 on aggregate, by Midtjylland – Morten Rasmussen grabbing the only goal in Denmark.

After their 5-1 win over HJK in the first leg, Krasnodar were able to cruise through courtesy of a goalless draw in Finland, while Lech Poznan completed a 4-0 aggregate success with a 1-0 win over Videoton.

Qualification was nowhere near as easy for AZ, though, the Eredivisie side needing two goals in the final 10 minutes against Astra to turn their tie around.

Jop van der Linden and Robert Muhren were the AZ heroes as they secured a 4-3 aggregate triumph with their last-gasp 2-0 win.

A Dodo double helped Qabala to a 2-2 draw against Panathinaikos, the Azerbaijani side going through on away goals thanks to the Brazilian's efforts in Athens.

Their compatriots Qarabag are also through after a comprehensive 5-0 aggregate win over Young Boys, while Viktoria Plzen progress with the same scoreline following Thursday's 2-0 victory at Vojvodina.

Away goal wins were the order of the day for Molde – who beat Standard Liege despite a 3-1 second-leg defeat - and Athletic Bilbao, whose 1-0 win over Zilina at San Mames resulted in the tie ending at 3-3.

Thursday also saw narrow aggregate wins for Rubin Kazan, Saint-Etienne and Legia Warsaw, while Fenerbahce and PAOK comfortably made it through and Belenenses 0-0 draw with Rheindorf Altach saw the Portuguese side progress thanks to a 1-0 first-leg win.

A six-goal thriller in Switzerland was not enough to see Thun past Sparta Prague. Nelson Ferreira's double resulted in a 3-3 draw at the Stockhorn Arena, but it was not enough for the Swiss side, who were already 3-1 down.

Slovan Liberec and Rosenborg are also into the draw, while Dinamo Minsk needed penalties against Red Bull Salzburg - who reached last season's round of 32 - to secure their place.