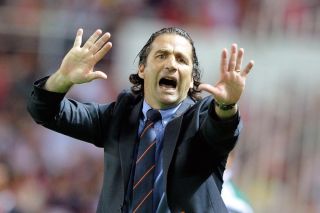 Juan Antonio Pizzi's men looked to be crashing out after the first leg of their quarter-final tie with Basel following a 3-0 defeat in Switzerland, but mounted an incredible comeback in the Mestalla.

Paco Alcacer scored a hat-trick as the La Liga side secured a stunning 5-0 win as Basel crumbled, but Valencia have again left themselves with a lot to do in the return leg against their Spanish rivals.

Quickfire goals from Stephane M'Bia and Carlos Bacca in the first half earned Sevilla a 2-0 advantage in the first game, with former Valencia boss Unai Emery getting one over on his ex-employers.

Both sides have enjoyed success in this competition in recent years.

Valencia lifted the trophy in 2004 under Rafael Benitez, while Sevilla are the only side to have defended their title since the tournament switched to a one-off final in 1998 - with wins in 2005 and 2006 against Middlesbrough and Espanyol respectively.

The prize for progressing to another final will be a clash with Italian giants Juventus or Portuguese champions Benfica in Turin on May 14.

The hosts go into the game on the back of a 1-0 defeat to title-chasing Atletico Madrid, a result which leaves them eighth in La Liga table and unable to qualify for next year's competition through their league placing.

Valencia have had the better of the two league meetings this season, winning 3-1 at the Mestalla and then securing a goalless draw in Sevilla - and they will need to make the most of home advantage again on Thursday.

Sevilla are enjoying a strong season under Emery, having won 13 of their last 17 games in all competitions.

They were beaten 3-1 at Athletic Bilbao last time out, though, in a game which put a huge dent in their UEFA Champions League qualification hopes.

Emery's men are now six points behind Bilbao in the race for fourth place, with only three matches remaining, and an inferior head-to-head record with the Basque outfit.

Sevilla also had to come from behind in their quarter-final, losing the first leg 1-0 in Porto, before hammering Luis Castro's men 4-1 in the return game in the Estadio Ramon Sanchez Pizjuan.

They will be hopeful Bacca - who has seven goals in this year's tournament and 21 in all competitions - can net them a crucial away goal that could put the tie beyond their hosts, but will be wary of the threat of Alcacer, whose treble in the comeback win over Basel moved him level with Bacca on seven goals in the competition.

Valencia duo Diego Alves and Philippe Senderos (both hamstring) are doubts, while Victor Ruiz (thigh) is definitely out.

The visitors are without Sebastian Cristoforo (knee) and Denis Cheryshev (foot), while defender Daniel Carrico is a doubt with an ankle problem.