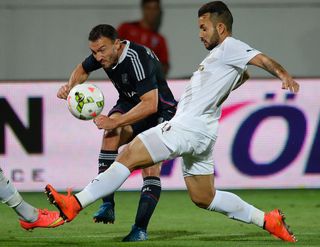 Ligue 1 Lyon travelled to Astra nursing a 2-1 deficit from last week's tie on home soil and managed to claim a 1-0 win in the return leg courtesy of Jordan Ferri's strike midway through the first half.

But the Romanian side held on to prevail 2-2 on away goals, earning a place in the group stages of a continental competition for the first time.

While Lyon had good reason to be wary entering their second leg, Sociedad of La Liga took a 1-0 scoreline to Krasnodar - an advantage they protected until a stunning late collapse.

Ari completed a 3-0 win on the night for the Russian side as Sociedad streamed forward in vain, as the Spaniards bowed out 3-1 over two legs.

Villarreal cut something of a contrast to their compatriots in storming to a 4-0 win over Astana to secure a 7-0 aggregate triumph, while Borussia Monchengladbach and Inter Milan were also resounding home winners.

Bundesliga outfit Monchengladbach made a keenly contested 3-2 win in their first-leg against FK Sarajevo seem like a trick of the mind as they chalked up a 7-0 victory - Swedish striker Branimir Hrgota following up his brace last week with a hat-trick.

A Serie A team far less accustomed to European competition, Torino, join their compatriots in the group stages after Omar El Kaddouri's penalty proved to be the only goal of the tie against Split.

Hull City beat Lokeren 2-1 on the night thanks to a Robbie Brady brace but the Belgian side progressed 2-2 on away goals, leaving Tottenham to fly the flag for the Premier League.

Mauricio Pochettino's men cruised past AEL 3-0 at White Hart Lane for a 5-1 aggregate victory and a group berth for the fourth consecutive season.

Dutch heavyweights Feyenoord and PSV advanced but it was a mixed night for the Eredivisie, as PEC Zwolle were beaten 3-1 at Sparta Prague to exit by a 4-2 margin and FC Twente's 1-1 draw with Qarabag dumped them out on away goals.

Feyenoord had a three-goal lead on the night wiped out before Elvis Manu netted in stoppage time to spark wild scenes as they won 4-3 against Zorya to seal a 5-4 aggregate triumph.

In-form Netherlands international Memphis Depay continued his phenomenal start to the season with a late brace to see PSV past Shakhtyor of Belarus 2-0 and 3-0 on aggregate.

Saint-Etienne beat Karabukspor 4-3 on penalties after a 1-0 win left the tie locked at 1-1 on aggregate.

Apollon enjoyed a night to remember with a comprehensive 4-1 win - 5-2 on aggregate - over Lokomotiv Moscow.

It was honours even in the Russia-Cyprus encounters as Chris Samba netted deep into injury time to hand Dinamo Moscow a 2-1 win at Omonia Nicosia, the first leg having ended 2-2.

Trabzonspor and Dnipro progressed after playing out respective goalless draws at Rostov and Hajduk Split, although Club Brugge's 1-0 win at home sent Grasshoppers packing 3-1 on aggregate.

HJK Helsinki had their 2-1 first-leg advantage wiped out by an early Louis Schaub brace before rallying to prevail with a 3-3 draw at Rapid Vienna.

PAOK overturned a 1-0 deficit with a 4-0 win over Zimbru and there was further Greek joy as Panathinaikos beat Midtjylland 2-1 in Denmark to triumph 6-2 overall.

Rio Ave beat Elfsborg 1-0 at home to go through 2-2 on the away goals rule, which spared Asteras Tripolis despite a 3-1 loss on the night at Maccabi Tel Aviv.

Elsewhere Rijeka, Partizan Belgrade and Dinamo Minsk were winners on the road against Sheriff, Neftci and Nacional respectively to progress to the round-robin phase.