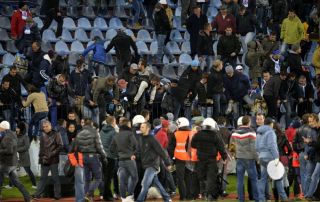 Sparta ran out 3-0 winners in the Slovak capital on Thursday in a match that was disrupted for a brief period prior to half-time due to crowd trouble at the Stadion Pasienky.

It was the first meeting between the sides since the break-up of Czechoslovakia in 1993 and the game looked in doubt when play was halted 42 minutes in.

While the Group I clash eventually resumed, both sides have now been sanctioned by UEFA for crowd disturbances.

As well as trouble in the stands, the Slovak club were also sanctioned for fans setting off fireworks and insufficient organisation, with UEFA handing out a fine of €50,000.

Sparta, sanctioned for "setting off/throwing of fireworks and missiles" alongside the crowd disturbances have been fined €80,000.

The Czech club have also been ordered to play one UEFA competition match as host behind closed doors, although this is deferred for a probationary period of two years.