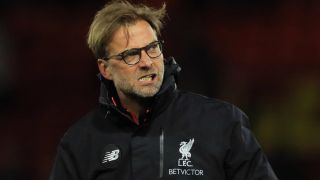 Jurgen Klopp is willing for Liverpool to win ugly against Middlesbrough and secure Champions League qualification.

Victory over Steve Agnew's already relegated side at Anfield will guarantee the Reds a place in the top four, with fifth-placed Arsenal gunning for three points against Everton so they can capitalise on any slip-up.

Liverpool missed out on European football entirely last season after suffering defeat to Sevilla in the final of the Europa League and Klopp is happy with the simplicity of the equation facing his side.

"It's important of course. So far it has been a very successful season and we want to finish it successfully," he told a pre-match news conference.

"It's all clear. We have to perform, we have to win and if we have enough points after this matchday then we deserve to go to the Champions League. If not, we don't deserve it. It's pretty easy."

Liverpool were in swashbuckling form as they swatted aside West Ham 4-0 at London Stadium last time out, but their past two outings at Anfield have yielded one point – a 2-1 loss to Crystal Palace preceding a frustrating goalless draw against Southampton.

"The best thing would be 4-0 after two minutes but that's not possible. We have to be ready for a football game and football games develop," Klopp said.

"Development depends on the start. If the start is not good, does that mean maybe we should stop then?

"If we have to restart a few times in the game we will. Everybody can be sure that we will fight for each yard. That is clear.

"If you give Middlesbrough the opportunity they can play football, they have good players. They want to enjoy their football and have nil-point-nil pressure. That's not the worst circumstances for playing good football.

"We are there and we have to be as ugly as possible, for sure. It's not about performing and stuff like this.

Along with the prize of bringing major European nights back to Merseyside, Klopp acknowledged the financial imperative of reaching the Champions League as he looks to bolster his squad over the close season.

"There are different reasons to want to be in the Champions League," he added. "It's a wonderful competition, outstanding. Fans love it, players love it, managers love it. It's great.

"And you can earn money there, a lot. That's money we didn't have last year.

"We are already in a good position, we are a club without financial problems but we always think it is good to think before we spend."