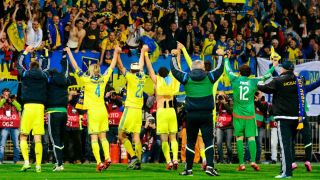 Mikhail Fomenko thinks Ukraine deserved to qualify for Euro 2016 after seeing off Slovenia in a two-legged play-off.

Ukraine finally ended their play-off curse thanks to a 1-1 draw in Slovenia on Tuesday that sealed a 3-1 aggregate triumph.

Speaking afterwards in Maribor, head coach Fomenko heaped praise on the Ukraine squad, telling reporters: "I would like to thank from my heart all the players for their work. For such a fight on the pitch you have to be really prepared both physically and mentally.

"Compliments also go to the entire leadership of the national team and the federation. In the dressing room there was really a lot of joy, a lot of emotion. We received congratulations from the president Petro Poroshenko.

"The last minutes were unbelievably nervous, it was difficult, but I am convinced that we deserved our ticket for the Euros. Now we are again at the beginning, a lot of work is ahead of us as we hope to prepare well for France 2016."