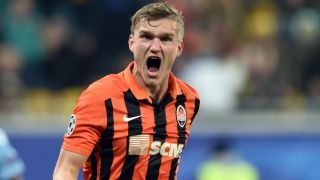 Ukraine will be without striker Olexandr Gladkiy for both legs of their Euro 2016 qualification play-off against Slovenia.

The Football Federation of Ukraine on Friday confirmed Gladkiy had not travelled to Lviv with the team for the first leg on Saturday and will not feature in either game.

Gladkiy picked up an ankle injury playing for his club Shakhtar Donetsk in a 4-0 Champions League win over Malmo earlier this month.

Ukraine are aiming to appear at the European Championship for only the second time, having been eliminated in the group stage of the 2012 tournament, which they qualified for automatically as co-hosts with Poland.