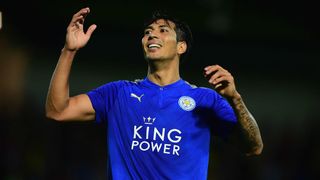 Leonardo Ulloa has secured a permanent move away from Leicester City having agreed a deal with Mexican club Pachuca.

Ulloa joined Leicester from Brighton and Hove Albion in 2014 he initially did well, scoring 11 times in his first Premier League campaign.

But he fell out of favour the following season as Leicester won the Premier League title, then manager Claudio Ranieri claiming Ulloa "betrayed" him as their relations soured.

He managed to secure a return to Brighton on loan last term, but his haul of one goal in 10 league games saw him win few plaudits.

But the 32-year-old has finally clinched a permanent transfer, linking up with Pachuca, who sit bottom of the Liga MX Apertura table after losing their first three games.

’s first strike for a decade Two in the famous 5-3 win over Man Utd ‘Earthquake Goal’ against Norwich Pressure penalty vs. the HammersYour favourite?  August 12, 2018