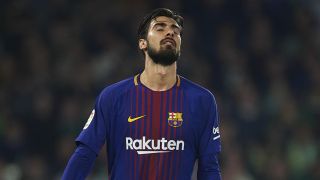 Denis Suarez is a doubt for Barcelona's LaLiga opener with a hamstring problem, while Andre Gomes' expected move away from the club has been thrown into doubt by a similar injury.

The club confirmed Spain international Suarez will miss around three weeks after damaging exactly the same muscle as team-mate Gomes.

The Portugal midfielder has been linked with Premier League sides Arsenal and West Ham, having struggled to settle at Camp Nou since joining from Valencia in 2016.

Reports suggest he could be sidelined for approximately two months, although the club did not provide a timeline for the 25-year-old's recovery.

Both players suffered their injuries in the International Champions Cup clash with Tottenham on Saturday and have since left the tour of the United States.

"It's been confirmed that Denis Suárez has a pulled biceps femoris muscle in his left hamstring. He's expected to be out of action for around three weeks," the club wrote in a statement.

"Andre Gomes has injured the very same muscle, also in his left hamstring.

"However, it would seem to be less clear when the Portuguese midfielder will be able to resume training – it all depends on how the injury progresses."