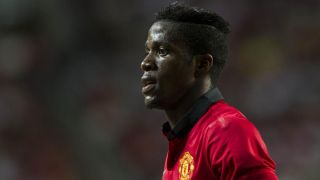 Zaha's impressive performances for Palace in the Championship led to his United move, signed by the club in January 2013 before making his debut in July.

But the two-time England international struggled for game time before having loan stints back at Palace and at Cardiff City.

The 22-year-old has been unable to recapture his form and Pardew, whose team visit Watford on Sunday, said Zaha's United move had set him back.

"Maybe you could argue he needed a year in the Premier League to really develop and the year going to Man United set him back, there's no doubt about that.

"He didn't get game time, didn't get the experience, he was trying to get into a great team. It's very difficult."

Since taking over at Palace in January, Pardew has wanted more out of Zaha.

The former Newcastle manager said there had been positives from the winger, but also two key areas that still needed work.

"Wilf has done a lot of things well since I arrived at this club," Pardew said.

"It's getting him on the ball which is the next phase for him and the end product."