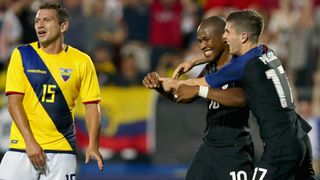 Substitute Darlington Nagbe scored a 90th-minute winner as the United States continued their preparations for next month's Copa America Centenario with a last-gasp 1-0 victory over fellow participants Ecuador in Dallas on Wednesday.

USA, who will host the centenary edition of South America's showpiece tournament, were far from their best with the Copa America just over a week away, as Ecuador looked the slicker of the two teams for large periods of the warm-up fixture.

But Jurgen Klinsmann and Co. managed to reign supreme thanks to Nagbe, who produced a stunning moment of skill in the final minute of regulation for his first international goal in six appearances.

Nagbe controlled the ball with his chest and volleyed it past Ecuador goalkeeper Esteban Dreer in front of 9,893 fans at Toyota Stadium as USA made it back-to-backs win ahead of the Copa America curtain-raiser against Colombia on June 3.

The Ecuadorians - drawn alongside Brazil, Peru and Haiti in Group B at next month's event - dominated from the outset as USA's centre-back pairing of John Brooks and Steven Birnbaum struggled to contain Valencia and Montero.

Montero, especially, was Ecuador's go-to man on the wing in the first half and almost forced USA to turn the ball into their own net after seven minutes, with Brad Guzan's reflexes enough to deny the visitors.

Despite being pegged back for much of the opening 45 minutes, USA somehow managed to go into the break on level terms, as Ecuador suffered a scare on the stroke of half-time with keeper Alexander Dominguez substituted due to a seemingly innocuous foot injury following a routine catch.

USA slowly found their rhythm in the second half but it was not until the 59th minute that they registered their first shot on goal.

The best chance of the half fell to substitute Alejandro Bedoya with 19 minutes remaining. Graham Zusi drove into the penalty area and slid a pass across the six-yard box, picking out the Nantes midfielder, whose effort flashed just wide of the post.

But just as the game was petering out for a draw, Portland Timbers star Nagbe - who came on at half-time - found the back of the net to lift USA to their first win over Ecuador since 2007.