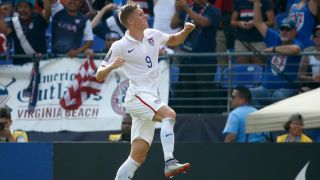 USA set up a semi-final showdown with Jamaica in Atlanta on Wednesday after seeing off Cuba 6-0 last week.

Johannsson was handed a starting role alongside Gold Cup top goalscorer Clint Dempsey in the absence of Jozy Altidore, who was omitted from the squad due to a lack of fitness, and netted USA's third goal in the quarter-finals in Baltimore on Saturday.

"For a striker to get his first goal of the tournament, it's huge," Johannsson told ussoccer.com.

"Obviously I would have hoped it would come sooner, but to score in the knockout stage is always good."

USA captain Michael Bradley was the architect of Johannsson's stunning breakthrough goal at the tournament.

Bradley lofted a ball through to the AZ Alkmaar frontman, who caught Cuba goalkeeper Disovelis Guerra off his line with a sublime chip.

"It's important to keep growing and get the opportunity to score goals, and when you have them put them in," said Klinsmann.

"That's how he was throughout the game – he was hungry, he was waiting for the next opportunity.

"That builds more confidence, it gives you a bit more standing in the group and when somebody is leaving a camp and somebody else is coming in, it's about repositioning the ranking in the team. He wants to move up in the ranking, there's no doubt about it."

Jamaica are set to compete their third semi-final following their 1-0 victory against Haiti.

Houston Dynamo striker Giles Barnes was the hero for Jamaica - beaten semi-finalists in 1993 and 1998 - with his sixth-minute goal the difference at M&T Bank Stadium.

"I am on cloud nine, and so proud of my team, my country and hopefully we can continue," Barnes said.

"We want to just go into the final and take it to a new level… going into the semi-finals with this team, my brothers, is the stuff dreams are made of."

USA have won their past three matches against Jamaica, who last emerged victorious 2-1 in a World Cup qualifier in 2012.