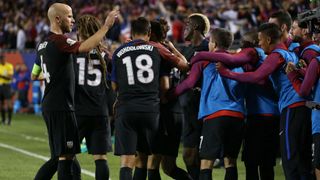 United States coach Jurgen Klinsmann is not playing down the magnitude of their final Group A match against Paraguay, with a place in the Copa America Centenario quarter-finals at stake.

USA recovered from an opening defeat to Colombia with a 4-0 win against Costa Rica, sending them second in the group and two points clear of Saturday's opponents.

A draw would be enough to send the hosts into the last eight, but, in a fixture carrying such weight, Klinsmann wants his team to go in search of the win in Philadelphia.

"This is already a knockout game on Saturday. This is it," said the German.

"This is our goal, to go through that on Saturday and then play the next one-off and learn how to play these one-off games to mature in our own way towards a World Cup where we want to go further."

Seeing Paraguay pull a goal back against Colombia in their previous outing, when Jose Pekerman's side looked to be in control, gave the USA boss cause for concern.

Ramon Diaz's team were unable to complete a turnaround following a red card for Oscar Romero nine minutes from time, but Klinsmann is taking it as a warning.

"This is a very unpredictable team. This is a team that has individual players that can hurt you in a split second, like Colombia experienced," he continued.

"They thought the job was almost done and then boom, they scored the one goal. If they don't go down to 10 men, they were right on the verge of equalising that game."

Paraguay forward Antonio Sanabria believes recapturing that spirit will be important if they are to leapfrog USA and advance from the group stage.

"We must go out with the same attitude we came out in the second half against Colombia with," he said.

"I think that will give us a chance to win that game, because surely they will be very confident about the result they had in the previous match."

Diaz has concerns over the fitness of Edgar Benitez, who trained apart from the group on Thursday, while Romero will serve a suspension.