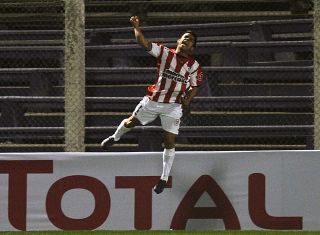 A 2-1 win at Fenix saw River Plate move top, with Nacional second on goal difference after a 3-0 win over Wanderers.

Previous league leaders Danubio slipped to third after they were held to a 1-1 draw at bottom-placed Miramar Misiones.

Lucas Olaza and Cristian Techera scored either side of half-time for Guillermo Almada's River Plate, who held on despite Bryan Aldave pulling a goal back for Fenix on 78 minutes.

Nacional were far more comfortable as Ivan Alonso's brace led them past Wanderers 3-0 at home.

The former Espanyol striker netted on 41 and 55 minutes before Carlos de Pena sealed the result late on, moments after Maxi Olivera had been sent off for Wanderers.

Those wins led to Danubio slipping a point behind the top two despite being the only undefeated team in the league.

Federico Fernandez gave lowly Miramar Misiones a 58th-minute lead and they looked on track for their first league win of the season.

But Jonatan Alvez secured a point for Danubio when he levelled 16 minutes before full-time.

Rentistas returned to winning ways with a 3-2 victory at Cerro Largo with Guillermo Maidana scoring twice.

Liverpool were 2-0 winners at home to Sud America, Defensor Sporting secured a 2-0 victory at Cerro and Penarol and El Tanque Sisley played out a 0-0 draw.

Juventud de Las Piedras' late show helped them to a 3-1 win at home to Racing.

Scores were locked at 1-1 heading into the final six minutes before the hosts had Emiliano Dorrego and Gaston Otreras strike.