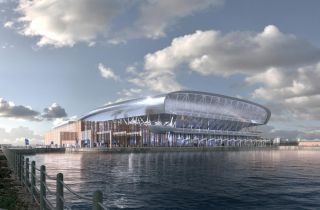 Russian billionaire Alisher Usmanov has strengthened his ties with Everton after paying £30million up front to secure an exclusive option on naming rights for the club’s proposed new stadium.

The 66-year-old, who sold his shares in Arsenal for a reported £550m in the summer of 2018, is a long-time business partner of the Toffees’ majority shareholder Farhad Moshiri and has been linked with buying a stake in the club.

Usmanov’s holding company USM already sponsors the club’s Finch Farm training ground and the Russian tycoon has now ploughed in further money with an agreement in place for the naming rights for Bramley-Moore Dock, which is scheduled to be completed by 2023.

A contract has already been agreed on a deal for the rights for the new ground and Usmanov’s £30m buys him first option of pursuing that at current market rates once the build is near completion.

Although no specific details about the finances have been revealed the PA news agency understands it is below the level of the reported £20m-a-year Tottenham are looking at for their new stadium.

The club are looking at funding 60 to 70 per cent of the estimated £500m cost of the new ground, for which planning permission was submitted last month, via a debt facility and two banks – JP Morgan and Mitsubishi UFJ Financial Group – have been engaged to explore options.

However, the club’s chief finance and commercial officer Sasha Ryazantsev said Moshiri “continues to invest in the club and is committed to ensuring the new stadium project progresses” and the majority shareholder is “excited by the plans and the progress made”.

🏟 | We can reveal the final designs for our new 52,000-seater stadium at Bramley-Moore Dock on Liverpool's waterfront!— Everton (@Everton) December 23, 2019

The latest Usmanov investment was revealed as Everton published their accounts for the 13 months – due to a realignment of their accounting period – showing the club made a loss of £111.9m despite posting the second-highest revenues in their history of £188m.

Overall net debt has fallen from £65.7m to £9.2m, largely due to a further £50m interest-free loan from Moshiri which takes his investment to £350m, in addition to his £100m-plus purchase price for the club in which he first took a majority shareholding in February 2016.

Key to the club getting on a more sustainable footing are the new stadium, which is predicted to produce a positive cashflow even after debt payments have been satisfied, and the prospect of European football with a top-seven league place outlined as an important factor over the next couple of seasons.

“Last year I shared with you our club’s long-term vision to establish Everton as an elite club challenging at the very top of domestic and European competitions,” said chief executive Denise Barrett-Baxendale.

“I was unambiguous that this meant winning domestic titles and trophies, competing regularly in the Champions League…in a world-class stadium.

“This ambition has not changed. We knew it would be extremely challenging, that it would not happen overnight and that it is a longer-term journey at commitment.

“These results reflect our position in the early stages of a long-term investment cycle.”