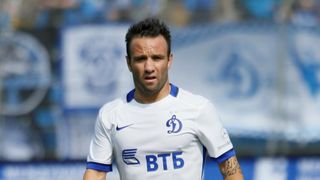 Mathieu Valbuena says the lure of playing UEFA Champions League football and making France's squad for Euro 2016 were the key reasons for his move to Lyon.

The diminutive winger moves to the Stade de Gerland on a three-year-deal for a €5million fee from Dynamo Moscow, bringing an end to his 12-month stay in Russia.

Valbuena is now setting his sights on winning major honours with the Ligue 1 side, as well as representing his country on home soil at the European Championship next year.

"I like the project here at Lyon, I don't regret my first year at Dynamo," he said.

"It is true that it was a football aim, with Lyon offering Champions League football, that made an impact on my decision. I am super happy to join them. In a career it is important to win titles. I will bring my experience with humility.

"I hope that we will spend some great times as a team here, I come here with a lot of personal aims. This was the most concrete offer. Lyon have a very good team, with great young talents, which played a role.

"Everybody dreams. I played Champions League with Marseille, Lyon can offer that to me now too. Euro 2016 is very important for me. The French national team, that's my motivation."

The 30-year-old does not believe there is an issue that he has joined one of Marseille's main domestic rivals.

"We know very well that there is rivalry between Marseille and Lyon. That's football," he added.

"What I had at Marseille was extraordinary. Nobody can take that away from me. I have always been a professional. I have never hurt anyone. I know that in football things change. I have no regrets joining Lyon, the opposite.