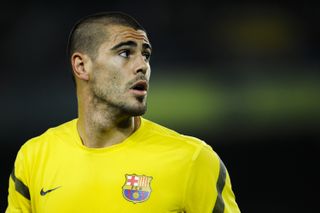 Table-toppers Barca made it five wins from as many La Liga matches on Saturday, as Pedro bagged a hat-trick in their comfortable triumph.

The Catalan giants had Valdes to thank for their second successive clean sheet as the 31-year-old saving a first-half penalty from Roberto Trashorras when they led by just one goal.

It was not the only important stop Valdes made, though, with the Barcelona goalkeeper on top form throughout the match, to the delight of Martino.

He said: "Valdes is playing at a fantastic level and all I can do is enjoy it as his manager.

"He had decisive saves and he saved a penalty."

With Barcelona in the midst of a busy period that sees them play seven matches in three weeks, Alex Song and Martin Montoya were given rare starts as Martino attempts to keep his squad fresh.

"Alex Song and Martin Montoya played very well," he added. "They are at a good level despite the fact that they don't get a lot of playing time."

Barcelona's next test comes against Real Sociedad, who they will host in the league on Tuesday.