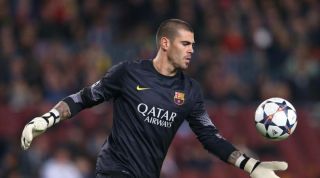 Valdes made more than 500 appearances for Spanish giants Barcelona before announcing his intention to leave the club at the end of last term.

The 32-year-old seemed on the verge of a move to Monaco but that was scuppered by his serious knee injury in March.

Valdes tore the anterior cruciate ligament in his right knee during a 3-0 La Liga win over Celta Vigo and has not played since.

But the player's agent – Gines Carvajal – said that his recovery is going well and that he expects an agreement to be in place by the end of 2014.

"One can sign at any time and I'm sure we'll see Valdes at a big team before Christmas," he told Cadena Ser.

"The recovery is going well, but we do not yet know when he will be cleared [to play again]."