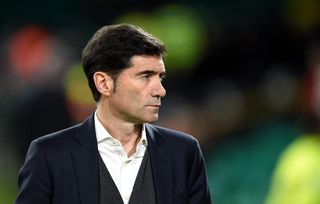 Los Che host the Yellow Submarine on Thursday in their Europa League quarter-final second leg, holding a 3-1 lead after their first game.

Valencia are sixth in LaLiga and have lost just once in their last 20 games in all competitions.

They beat Villarreal 3-0 in the league in January but Marcelino is wary of their favourites tag.

He said: “We can not trust, we want to win, it’s the best way to avoid any surprise. We want the players to enjoy the game and work with ambition and maximum enthusiasm.

“We cannot be with the idea of ​​letting the minutes pass because the result is worth it, that is not the right mentality, we must avoid that situation.

“Winning gives us confidence and winning increases your expectations regarding everything.”

Marcelino also confirmed he will make changes to his side given their gruelling season so far.

“We will continue making changes, we can not play all the games that are left. We trust in the entire squad and the players support us with their performances,” he told the club’s official website.

“We will try to use everyone, knowing that we must give the maximum performance to achieve the objectives.”

Villarreal sit 15th in LaLiga, just two points above the relegation zone and are without banned defender Alvaro Gonzalez, while Daniele Bonera was injured at the weekend.

Three of Villarreal’s seven wins in 2019 have come in the Europa League and former Leicester midfielder Vicente Iborra says the team will come out fighting.

He told Villarreal’s official site: “This team will show its face. Every single one of the players is committed, they always want to play and give everything for the team.

“Personally, I’m very happy to be able to help my team-mates on the pitch.”