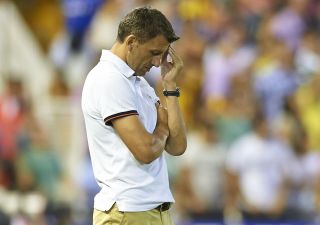 Djukic came under further pressure after watching his side fall to a 3-0 home defeat to Swansea in the UEFA Europa League on Thursday.

This result came off the back of three successive losses in La Liga and means Valencia have now conceded three goals in their last four matches.

The Mestalla outfit enjoyed a solid start to the season with a 1-0 success over Malaga on the opening day, but their performances have dipped dramatically since then.

However, the Serbian manager remains confident he is the right man for the job, and has backed his side to come out fighting when they host Sevilla on Sunday.

"I look at this with strength," he said. "The same as always. I will not resign.

"We (the coaching staff) all agreed that we lack confidence and that we can start resolving this with a win."