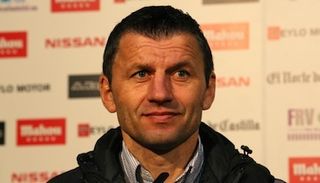 The club posted a video on their website of the Serb arriving in Valencia to sign his contract and said he would be presented to the media on Wednesday.

A former Yugoslavia international, Djukic spent six seasons at Valencia as a player and also had stints at Deportivo La Coruna and Tenerife.

As a coach, he helped Real Valladolid win promotion back to the Spanish top flight in the 2011/12 season.

They finished in 14th place last term and he announced at the end of the season he was moving on.

Djukic is well known in Spain for missing a penalty kick late in Depor's final match of the 1993/94 season against Valencia which handed the title to Barcelona.

He told reporters earlier on Tuesday coaching a club of Valencia's stature was "a dream come true".

"I think we have a very good and very competitive team which is ready to achieve the club's goals," the 47-year-old added.

"I am ready and I have the calm that comes from knowing we have the tools to do great things."

Valverde, brought in to replace Mauricio Pellegrino in December on a six-month contract, said instability at cash-strapped Valencia had convinced him it was best to leave.

They lost 4-3 at Sevilla on the final day of the La Liga season on Saturday and missed out on a Champions League place.

The club has suffered an institutional crisis over the last few months which led to president Manuel Llorente quitting. A replacement is set to be appointed following a shareholders' meeting on Wednesday.