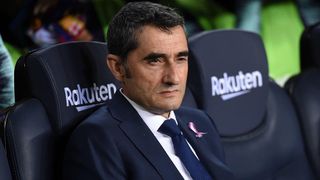 Ernesto Valverde says he does not want to see any coach sacked after masterminding a 5-1 Barcelona win over Julen Lopetegui's Real Madrid.

Barca dominated Sunday's Clasico to seemingly push Lopetegui closer to the exit door after a week in which talk of an imminent sacking intensified.

But while Valverde revelled in a big win, inspired by Luis Suarez's hat-trick, he empathised with his Madrid counterpart.

"I know what it's like to be in a difficult situation, where the results do not come in," Valverde said. "Everything is focused on the coach. It's what happens in football. I put myself in his shoes and I know he's having a hard time.

"What happens to [Lopetegui] could happen to me in three weeks. This is how it is - we are exposed as coaches. I wish Julen the best.

"I will not get into whether he deserves to be sacked or not. I don't like to see any coach get sacked, not Lopetegui, not the Huesca coach, not the Granada coach and, of course, not the Barca coach."

Valverde is not willing to draw too many conclusions at this early stage of the season, referencing Barca's poor Supercopa de Espana performances prior to last term's LaLiga title triumph.

Asked if Madrid are out of the title race, he replied: "Of course not, this is just matchday 10.

"They are not going to make the same mistake as last year, where it seemed that, after the Supercopa, we were out of everything."

Not getting carried away, Valverde added: "Every week, there are three games. There are weeks when everything goes very well, like this one. And there are others when, for whatever reason, you do not win a game.

"Those weeks without winning are a disaster. There are two types of weeks and we must keep calm."