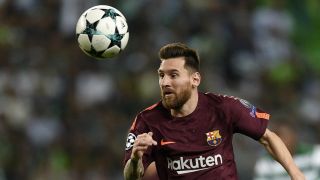 Messi is already joint-third with Puyol on Barca's all-time list with 593 and will move on to 594 when Barca host Las Palmas in LaLiga on Sunday.

"Puyol was here for lots of years, and Messi is just 30 and he is already past Puyol."

Leo equals and is now third on the all time appearance list for Barça September 27, 2017

Valverde has won eight from eight as Barca coach in LaLiga and the Champions League, helping to allay concerns following Neymar's departure to Paris Saint-Germain and their Supercopa de Espana loss to arch-rivals Real Madrid.

Asked if their start had raised morale in the dressing room, Valverde replied: "Winning is always nice. It's good for everybody, even though you win you can't let your guard down.

"You permanently need to be cautious and need to keep that tension to keep wanting to win all the time.

"If you want to convince somebody about a project then you need to win. In football that's how it works because no matter how nice the script is, if you don't win at the end of the day you're not doing your job right."

Barca face a Las Palmas side under the tutelage of Pako Ayestaran, who took over from Manolo Marquez this week following his resignation.

But Valverde does not expect the change in the dugout to impact the game too much.

"With such a short turnaround there's not going to have been very much change to the team," he added.

"This is one of those games where it is perhaps hard to judge, where we can think about what Pako Ayestaran did at Valencia. It's going to be difficult because we know Pako Ayestaran likes to organise his team well."