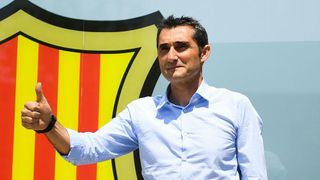 Valverde ended a respected stint with another former club from his playing days, Athletic Bilbao, to take over from Luis Enrique at Camp Nou.

Luis Enrique ended a trophy-laden reign with victory over Alaves in the Copa del Rey final on Saturday but Real Madrid prevented Barca from winning a third consecutive LaLiga title.

Barcelona will have their bitter rivals in their sights once more in 2017-18 but have been the dominant force in Spain over recent years, finishing top of the pile in six of the past nine seasons.

"It's a privilege to come here. I feel very lucky that the club had me in mind and offered me the job," Valverde told Barca TV ahead of his official unveiling, which will take place on Thursday.

"I am very excited about heading into this new stage of my career. It's an enormous challenge and I have the intention of making Barca even greater than it already is."

Valverde played at Barcelona for two years between 1988 and 1990 but served largely as a squad player at the beginning of Johan Cruyff's "Dream Team" era.

"It was a long time ago. I'm a bit older now, I have a little more grey hair," said Valverde. "I'm starting to think about that time now and this is a totally different era.

"I'm a lot more conscious now of what it means to take this step. I was very young back then. I've had a couple of spells at clubs where I played as well and now Barca too."

Valverde also offered assurances to fans that he would aim to satisfy them by staying true to Barcelona's entertaining style on the field.

"We want the fans to see a team that is committed on the field and, above all, committed to its supporters." he added.

"I'd like the fans to keep enjoying things the way they have in recent years. In the last several seasons, they've been able to enjoy great players and coaches.