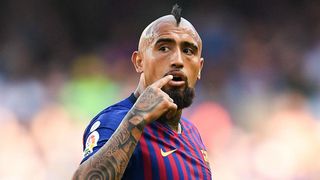 Barcelona boss Ernesto Valverde says he does not know if Arturo Vidal was left angry by the decision to leave him out of the starting line-up against Tottenham.

Vidal was reportedly furious not to be named in the first XI for the 4-2 Champions League win at Wembley on Wednesday, in which Valverde reverted to a four-man midfield.

An angry emoji was posted on social media by the Chile international, although it was later removed and followed up by a Twitter message in which he said: "Never give up! The best is yet to come."

Vidal has struggled to force his way into the starting line-up since joining from Bayern Munich and is reportedly growing frustrated with his lack of involvement, but Valverde appears unconcerned by his latest reaction.

"We're a team. He hasn't told me anything. I don't know if he's angry about the game or about a domestic accident," Valverde told a news conference.

Barca's win over Spurs was inspired by Lionel Messi, who scored twice and played an important role in the goals from Philippe Coutinho and Ivan Rakitic.

Valverde admits playing in Europe probably encourages the Argentina star to show greater "enthusiasm", but he thinks this is true of all of his players.

"I think he's the same every game," he said. "As far as enthusiasm goes, yes, certain games maybe bring more out of the players. There was an incredible rhythm to the game the other day and that brings more out of every player, not just Messi.

"But, mentality wise, I see Leo going into every game the same."

Barca face Valencia at Mestalla on Sunday in their final match before the international break.

There have been concerns Luis Suarez will miss the match due to a knee injury, for which he will start treatment on Monday, but Valverde hopes to have him involved.

"He's training with us today, he didn't yesterday because it was part of his recovery. He's part of the plans. The idea is for him to play," Valverde added.