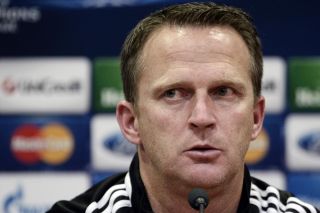 The 47-year-old has been charged with the task of replacing Van Basten as AZ coach after the legendary former Netherlands striker stepped down due to health reasons earlier this month.

Van Basten was appointed assistant coach on a deal until 2016 after returning from a leave of absence, as he suffered from reputation heart problems brought on by stress.

AZ were left to look outside the club for a replacement when Alex Pastoor, formerly Van Basten's number two, rejected the chance to take over as coach.

Van den Brom, capped two times for Netherlands in his playing days, has emerged as the man to take the club forward and AZ revealed they will disclose details of the new coach's contract next week.

The former Ajax midfielder has been out of work since being sacked by Anderlecht in March, after spending just under two years with the Belgian club.

Van den Brom will not take charge of AZ in their Eredivisie clash at ADO Den Haag on Saturday.