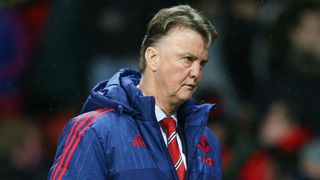 Louis van Gaal was frustrated by a lack of criticism for Sheffield United's attacking exploits as his Manchester United side continue to be accused of negative tactics following a slim 1-0 win in the FA Cup third round.

Van Gaal's team were shorn of endeavour and creativity as they struggled against their third-tier opponents at Old Trafford, ending the game with just two shots on target - one of which was Wayne Rooney's converted 93rd-minute penalty.

The Dutchman conceded his players would benefit from playing with a higher tempo, but questioned why Nigel Adkins' League One side were not facing similar scrutiny for only producing two shots on goal.

"We have to do it better, of course, because we have to play quicker and move the ball quicker, then the gaps are coming and you have to see a player and time the pass," Van Gaal told BT Sport.

Despite the hosts' insipid display, Van Gaal was simply happy with his players for securing a place in the next round.

"I think it's always difficult to play against such an opponent. They are defending with 10 or 11 players behind the ball," he continued.

"In the second it was a little bit better, we created more. They were very well organised and at the end we got the penalty.

"It was a deserved penalty and we won the match and that's the most important thing. I said to the boys, the only thing that counts is that we are in the second round [sic, fourth round]."

Bastian Schweinsteiger sustained an injury following a collision with Chris Basham in the 82nd minute, but played on despite receiving treatment.

On Schweinsteiger's chances of being fit to feature against Newcastle United in the Premier League on Tuesday, Van Gaal said: "It shall be difficult. I don't know yet. I think he has a knee problem, everybody thinks it's an ankle problem but I think it's more of a knee. We have to wait and see."