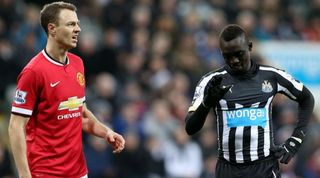 Evans and Cisse clashed during the first half of Wednesday's Premier League clash at St James' Park, which the visitors won 1-0.

Replays seemed to show Evans spitting at Cisse as he lay on the turf, with the Senegal international reacting angrily and also appearing to spit back at the Northern Ireland man.

Evans has since spoken out to deny any wrongdoing, while Cisse has apologised for his actions.

The Football Association (FA) has confirmed it has received the match official's report for consideration along with footage of the incident.

"As I've said in last night's press conference, Jonny was not aware that he was spitting," Van Gaal said. "It's a natural thing for a human being, it wasn't his intention.

"I cannot imagine that Jonny Evans could do something like that, and he's also said that.

"I believe him, so the matter is done. I think the FA is very wise."

United meet Arsenal in the FA Cup quarter-finals on Monday, and Van Gaal says the winner could reap the benefits when it comes to their league form.

"We're in a rat race in the Premier League and whoever wins on Monday will have good momentum for the league games," he added. "When you win, it has a good influence on the next game.

"After the defeat at Swansea [2-1 last month] we won two games, so we have a good feeling.

"I want to achieve the goals we've set. That goal is to reach the top four, and a trophy would be fantastic."