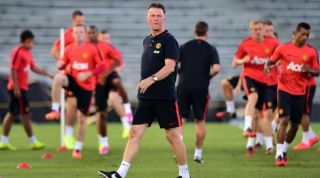 Butt has been impressed with the way the Dutchman, who guided his country to third place in the World Cup, has settled in at United and believes the club could challenge for the title this season.

The former United midfielder has been retained as part of the backroom staff at Old Trafford, with his focus on developing young players.

David Moyes struggled under the pressure of succeeding Alex Ferguson at United last season, but 39-year-old Butt does not expect the new man in charge to have any such problems.

"He is obviously a very in-control man," he told the Manchester Evening News. "He has an aura about him - when he walks in the building, you know who the boss is, and I think that is very important.

"We had that with Sir Alex for all those years and I think we have that now with Van Gaal. He walks into the building and he commands your respect.

"All the players look up to him as the leader and that is how it should be.

"From afar, when I've looked at him it looks like he takes no messing about and if anyone doesn't toe the line, I'm sure they will be out of the team."

United have won every game since the 63-year-old arrived and have one friendly against Valencia remaining before their opening Premier League clash with Swansea City on August 16.