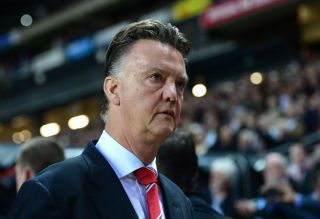 Van Gaal placed Shaw on an individual regime during United's pre-season tour of the United States after claiming the 19-year-old had returned to training unfit.

England boss Hodgson has subsequently stated that he and physio Gary Lewin had warned Shaw to improve his fitness during the World Cup.

However, Van Gaal feels Hodgson should not be talking about the issue and suggested that Shaw had been in great shape before suffering a hamstring injury earlier in August.

"About Shaw I want to say something. I have read nasty articles about him. In the United States I said to him 'you came not fit'," said Van Gaal.

"But I changed his programme and he did everything that he was to do to be fit and now he is an example in the dressing room.

"He is training fantastic, so when you want to write something then maybe you can ask me 'is he doing his work or not?' I am open, I answer the questions when you put a question to me.

"He is not fit now because he is injured but Roy Hodgson cannot judge at this moment.

"Roy Hodgson cannot judge him because I have never seen him here at a training session.

"I think that he refers to the World Cup but I don't know. But now he [Shaw] is doing a great job."