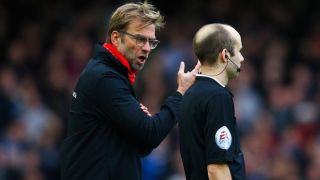 Manchester United manager Louis van Gaal says he used to be like Jurgen Klopp on the touchline until he developed the ability to control his emotions.

Klopp, who took over at Liverpool in October and comes up against Van Gaal's men at Anfield on Sunday in the Premier League, is renowned for being an entertaining figure in his technical area with his celebrations and antics.

The German is also known for getting in the ears of referees, something Van Gaal can relate to in his earlier days of management.

"When I was younger I was like Klopp." he said. "Now at 64 I can control my passion more.

"I don't think the referees in England are influenced by what the manager or the fans do. Every manager has his own identity, his own personality and also his own philosophy.

"When I started my career I did that [Klopp-like actions] also. But I don't think you can influence from the touchline."

Van Gaal knew he had to tone down his emotions on the touchline after performing a fly-kick in Ajax's 1-0 Champions League final win over AC Milan in 1995.

"I did a karate kick," said Van Gaal, laughing at the memory.

"It was the 1995 Champions League final, Ajax against AC Milan, and I did a flying kick.

"We won 1-0, but we should have had a penalty for a high tackle on [Jari] Litmanen.

"I was angry, so I did a karate kick on the touchline – about a foot away from the fourth official's face. I wanted to show him what had happened to Litmanen.

"It should have been a penalty, but the referee did not whistle for a penalty. And in that moment, I realised that a manager can never influence the referee by what he does on the touchline.

"I realised that you have to control your passion. I know a lot of fans like the manager to show he is angry and at Newcastle [United] the other night I was angry when Jesse Lingard missed a chance to score [in the 3-3 draw].

"I am a little bit older now. But I still see the referee from 1995. He is a UEFA controller of referees now – and he reminds me what happened that night."