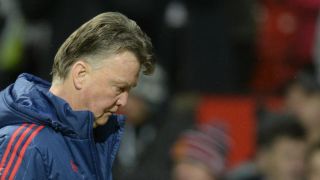 Manchester United manager Louis van Gaal says he has bigger things to worry about than whether or not he will be booed by the crowd at Old Trafford on Tuesday.

United welcome Stoke City and will be looking seek revenge for their 2-0 loss against Mark Hughes' men on Boxing Day.

However, there is concern the Old Trafford faithful may have a hostile reception in store for their under-pressure Dutch manager, despite a 3-1 win against Championship outfit Derby County in the FA Cup fourth round on Friday.

In their last league game, United were limited to one shot on target in a disappointing 1-0 loss to Southampton at home, after which the crowd made its discontent known to Van Gaal and his players.

But whatever the fans might think of him, Van Gaal said it is important that they back their players.

"I’m not a stupid man," Van Gaal said. "I’m an intelligent man and I cannot predict the atmosphere on Tuesday.

"I hope that we can give the same level of performance as against Derby but we have to play Stoke, another opponent. I’m always honest. That wasn’t an exception [the reaction during the Saints game] but OK.

"They have to give a result at that hour with that resistance [of Stoke]. There are no excuses. They have to support – the fans.

"When I’m not so popular, then OK. It’s also not the first time that it’s happened with me but I can survive. They supported us fantastically against Derby. I have heard more the fans of United than of Derby.

"We are the away team. It’s also fantastic that there is such a big part coming to see ‘boring’ Manchester United."

Van Gaal expects another tough encounter with Hughes' Stoke side, who he said would not make life easy for his team.

"I like how Stoke play very much. I saw them play this week and they were very good. I think they deserved to win [against Liverpool] but they didn’t," he said.

"That’s football. You can lose. They are in good shape, good form. They are a team that every club in the Premier League has a lot of difficulties with."