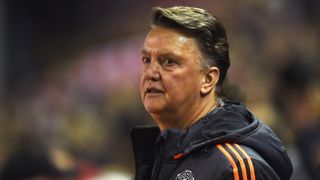 Daniel Sturridge converted a 20th-minute penalty before Roberto Firmino scored for the third game in succession after the break, with United indebted to goalkeeper David de Gea for preventing a rout in the first leg of their last-16 tie.

Van Gaal believed referee Carlos Velasco Carballo's decision to award a penalty for Memphis Depay's foul on Nathaniel Clyne was questionable and felt Liverpool might have been penalised for offside in the build-up to Firmino's goal, although he conceded Jurgen Klopp's side were worthy winners.

"They played very good in the first half and we could not cope with their pressure," Van Gaal told BT Sport. "They had chances but David de Gea was fantastic.

"It is a cheap penalty. The referee cannot [award the penalty] because I think that [Depay] holds [Clyne] outside the box and then he is falling down. It is not because he is kicked by Memphis - but it is difficult, you cannot see that in one second.

"In the second half we changed the shape and we had much more contribution in the game but we didn't create many chances and they scored another cheap goal.

"That's difficult because 2-0 is a very difficult result for us. I've seen the videotape [of the second goal], I think also that the guy [Jordan Henderson] who gives the pass from outside was already offside."

Van Gaal marvelled at a raucous Anfield atmosphere and called on the Old Trafford faithful to help inspire an unlikely turnaround in next week's second leg.