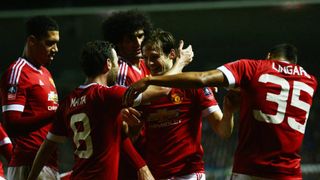 United looked something like their former selves as they put the Championship outfit to the sword in an impressive second-half performance, with goals from Daley Blind and Juan Mata sealing the win after Wayne Rooney's superb first-half opener was cancelled out by George Thorne.

Van Gaal said Derby's attempts to press higher up the field as the game wore on allowed his side to find more space.

"I have to say Derby County in the second half were pressing forward more," the United manager told MUTV.

"When we beat that pressure then there was more space and that was also the reason why we scored two goals.

"We have won every game in 2016 except the game against Southampton and that was because of the lack of confidence. We played at home and the fans were supporting us, so it [our performance] was a little bit ridiculous.

"But that's how it was. Now the confidence is back, we dared to play again and in spite of the pressure of Derby County in the second half we met that pressure, we created chances and we scored fantastic goals I have to say.

"The second and third were fantastic combinations and fantastic finishes as well."

The performance of Frenchman Anthony Martial, who assisted Rooney and Mata for their goals, was another subject of delight for the Dutch manager, even if the forward did disappoint in his opening 20 minutes.

"He started not so good, I think, but I said that to him and after the first 20 minutes he came into the match and he was fabulous," he said.

When asked by reporters at his post-game news conference about how he would celebrate the victory, Van Gaal said he would enjoy some fine wine given him to by the club's chief-executive Ed Woodward after United beat Liverpool in the Premier League earlier in January.

"We drink a nice bottle of wine, probably the most expensive wine, because I have received that from Ed Woodward," said Van Gaal.

"I get always expensive wine when we beat an opponent of out the top six. I don’t want to mention the name because it is a little bit extravagant."

Van Gaal said his future was never riding on the result of one game in particular.