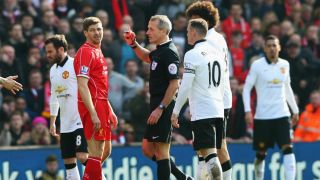 Louis van Gaal has warned Manchester United to control their aggression against Liverpool in order to avoid a repeat of Steven Gerrard's red card from last season.

Former Liverpool captain Gerrard was sent off for a stamp on Ander Herrera less than a minute after being brought on at half-time of the clash at Anfield, which United went on to win 2-1.

United boss Van Gaal accepts that passions run high due to the bitter rivalry between the clubs, but has urged his players not to get carried away by the occasion.

"I've felt it [the passion] also, four times, because we've played each other four times," he told his pre-match media conference on Friday.

"You can see it on the faces of the players: last year, for example, Gerrard came in and was sent off within 30 seconds. That doesn't happen much.

"So we need to be aggressive but also under control, but that's difficult, the passion in this kind of game is very high."

Sunday's clash sees Van Gaal face off against Jurgen Klopp for the first time since he left his post with Bayern Munich in 2011.

And the Dutchman believes English football will enjoy the way former Borussia Dortmund manager Klopp asks his teams to play.

"But he is very capable, he's always shown this kind of football and I think the fans will love it."

Van Gaal also confirmed Bastian Schweinsteiger is unlikely to be fit for the visit to Anfield.

The Germany captain sat out the 3-3 draw with Newcastle United on Tuesday as a result of a knee problem sustained in the FA Cup win over Sheffield United. Michael Carrick is also ruled out.

"I think we have the same injuries as before, maybe Schweinsteiger is coming back but that is not for sure," Van Gaal told MUTV. "It is very tight to regain [full fitness] I think, he needs more time I think.

"Carrick, he is also injured, we have forgotten to mention it but he was injured. He is still injured so he cannot play either."