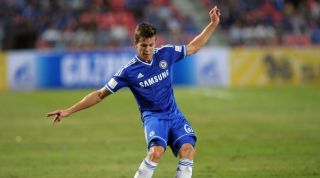 With the exception of veteran Mark Schwarzer in goal, Chelsea fielded a young starting XI for the friendly at Adams Park, with midfielder Van Ginkel back in the side after missing most of last season with a cruciate ligament injury.

The visitors' youthful approach appeared to be paying off when, after a period of dominance, Patrick Bamford scored the opener in the 20th minute.

The forward - on loan at Derby County last season - volleyed home after being teed up by Nathan Ake's cross.

An injury to Todd Kane midway through the half gave Chelsea fans a first glimpse of Kurt Zouma, who signed in January but was loaned back to Saint-Etienne for the remainder of the season.

Chelsea boss Jose Mourinho made eight changes to his side for the second half, introducing the experience of John Terry and Branislav Ivanovic at the back.

And, after Izzy Brown had doubled the visitors' lead in a match that doubled as a testimonial for Wycombe stalwart Matt Bloomfield, Terry volleyed in a third.

Ivanovic sent a glancing header beyond Matt Ingram in the 67th minute with Chelsea firmly in control, before Brown rounded off the scoring three minutes from time with a curling effort from just outside the penalty area.