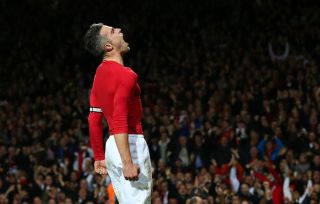 The Netherlands international scored in stoppage time at Old Trafford on Sunday to rescue a point from his side's clash with the Premier League leaders.

Van Persie's late goal extended United's unbeaten run in the league to four matches and ensures they will head into this weekend's Manchester derby on something of a positive note.

Ahead of this season's first meeting with fierce rivals City, Van Persie feels the point proves Louis van Gaal's side can compete with the league's best sides.

"We all know that this club wants to go for the highest - first place," he told the club's official website.

"It’s getting better every day, we are improving all the time."

Van Persie received a yellow card for removing his shirt after equalising against Chelsea - something Van Gaal described as a "stupid reaction".

The former Arsenal man revealed emotion got the better of him as he celebrated his first United goal since the end of September.

"I know it’s one of the rules that you have to keep your shirt on but sometimes you forget and everything comes together and the whole place explodes," he added.

"It was one of those fantastic moments and the main thing is that we got something out of this game because we deserved it."